From the sultry melancholy of Astor Piazzola and the burning Afro Cuban jazz of Tito Puente, to the rhythmic playfulness of jazz great Dave Brubeck and the pop strains of The Beatles, Mambo Kings will be your guide on a Latin jazz tour of the Pan American experience.

MAMBO KINGS, together since 1995, are enjoying great success as Upstate New York's foremost Latin jazz ensemble, and have rapidly earned a national reputation for their explosive blend of Afro Cuban rhythms and jazz improvisation.

Since their orchestral debut in 1997 with the Rochester Philharmonic and Conductor Jeff Tyzik, Mambo Kings have appeared at the Bravo! Vail Valley Music Festival and in Pops concerts with orchestras in Baltimore, Vancouver, Detroit, Dallas, Naples (FL) and Portland (OR), among many others, performing original compositions and arrangements by pianist Richard DeLaney.

As a quintet, Mambo Kings have appeared as featured soloists at the Xerox Rochester International Jazz Fest, the Music In The Mountains Festival in Colorado, the Lewiston (NY) Jazz Fest, and the Big Sky Arts Fest in Bozeman, MT.

2017 included return performances with the Vancouver (BC) and Dallas Symphony Orchestras. The 2018 season featured shows with the Spokane and Louisville Symphonies, the Rochester Philharmonic and the New Jersey Symphony.

The 2019 season featured performances with the Alabama Symphony, a sold-out concert with the Grant Park Music Festival in Chicago and a show with the Des Moines Symphony.

Musical Director Richard DeLaney, a native of Lima, Peru, has been active as a jazz pianist, arranger and composer in Rochester since earning a Master's Degree from the Eastman School Of Music in 1978. He has written and performed music for film, television, the stage and the concert hall. He has performed with the Rochester Philharmonic and the Rochester Chamber Orchestra, as well as with Paquito D'Rivera, Bobby Sanabria and numerous bandleaders in Rochester. Richard joined the piano faculty of the Hochstein School Of Music in 1985 and has directed the school's Jazz Ensemble Program since 2001. He is currently coaching two student jazz ensembles. He received the Faculty Service Award in 1996.

Percussionist Wilfredo (Freddy) Colón (drums, timbales, bongos) has performed with Aretha Franklin, Tito Puente, Soneros Del Barrio, Johnny Rivera, El Cano and Paquito Acosta. He has taught percussion at the Eastman School Of Music's Community Education Division and is much in demand as a percussion clinician in the Rochester area.

Saxophonist John Viavattine has been an accomplished woodwind specialist in Rochester for many years. John has toured with the Glenn Miller Orchestra, including a memorable performance in Washington, D.C. at President Reagan's 1980 Inaugural Ball. John has also performed with Chuck and Gap Mangione, Jeff Tyzik and the Rochester Philharmonic, The Temptations, Ray Charles, Patti Page, Connie Francis, Vic Damone and Lou Rawls.

Bassist Hector Diaz has been playing with bands in the Western New York area since the age of thirteen. He has performed with Ismael Miranda, Hector Tricoche, "El Cano" Estremera, Paquito Acosta, Zafra Negra, Luisito Rosario, Wendell Rivera and Johnny Rivera. While in the Army, Hector toured with an All Soldiers show throughout Army bases in South Korea.

Percussionist Tony Padilla (congas) was born and raised in Rochester. A self taught percussionist, he began playing at age 12 and has been performing professionally since the age of 14. Tony has played with such artists as Paquito De Rivera, Steve Gadd, Peter Erskine, Arturo Sandoval, Jerry Gonzalez, Lou Gramm, The Maelstrom Percussion Ensemble and The Rochester Philharmonic Orchestra. Since 1983, Tony has been conducting clinics/workshops throughout United States, including The Eastman School Of Music, The New York State Teachers Music Association, The Percussive Arts Society, and a variety of colleges and high schools. 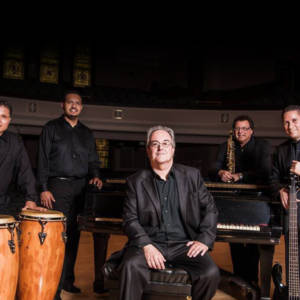 From the sultry melancholy of Astor Piazzola and the burning Afro Cuban jazz of Tito Puente, to the rhythmic playfulness of jazz great Dave Brubeck and the pop strains of The Beatles, Mambo Kings will be your guide on a Latin jazz tour of the Pan American experience.