This is the program you’ve all been waiting for—by the time it arrives, literally for two years! We were on the verge of performing this concert when the Covid lockdown began in March 2020. We are looking forward to having Sujari Britt back with us at last, for her long-awaited performance!

Price Dances in the Canebrakes
Saint-Saëns Cello Concerto no.1
Still Symphony no.1, “Afro-American”

Sujari Britt showed her prodigious talent and uncanny devotion to and understanding of music from a very early age. She began formal study of the cello at age four, following her study on the violin, and piano.

Sujari earned her Bachelor's of Music (2018) in Classical Cello Performance at Manhattan School of Music in the studio of distinguished pedagogue, author and cellist Marion Feldman. Sujari presently studies with renowned cellist and pedagogue Martti Rousi, Sibelius Academy in pursuit of her Master's of Classical Cello.

In February 2019, Sujari is a featured artist at Musiikkotalo, Cellofest Opening Gala in Helisinki, Finland. Sujari also is featured at CUNY/Queens College, where she will present the Elgar, Cello Concerto in E minor.

Sujari was featured in the annual Beijing Super Cello Festival, Beijing China in May 2018. Also in May 2018, Sujari spoke and presented at C2 Montreal for the 2018 "Transformative Collisions". In Fall 2017, Sujari delivered a solo concert sponsored by Marietta College for the annual Esbenshade Series at People's Bank Theatre, Marietta, Ohio. In Spring 2016 Sujari was featured in Canada’s Neopolitan Connection Concert Series. She performed solo with Memphis Symphony Orchestra in November 2015, solo with the Chicago Sinfonietta in January 2015, and opened the 2014-15 season with Las Cruces Symphony Orchestra as soloist in their Classics Series. Sujari was featured at the UN’s international HeforShe in September 2014, and she presented at Madison Square Garden during quarter time for the NY Knicks in January. In October 2013 Sujari was a featured artist for the Shakespeare Company’s annual gala honoring Elizabeth McGovern at the Harman Arts Center in Washington, DC. Also in the 2013 season, Sujari performed at the United Nations for 2013 annual World Humanitarian Day on August 19th. Sujari served as the featured guest performer for the Adrian Symphony Orchestra Casual Classic Concert in May 2012. In May 2011 Sujari was the featured artist at the 28th Annual Children’s Concert for the Gary Historic and Cultural Society in Gary, Indiana. In 2010, Sujari closed the 11th Annual International Tropical Baroque Music Festival of the Miami Bach Society in Coral Gables, Florida, and in April, she performed at Carnegie’s Weill Hall as a winner of the National Young Musicians Concerto Competition. She was invited as a guest performer at the Fifth Annual Midori and Friends Children’s Music Festival where she shared the progamme with Midori and with renowned clarinetist Paquito D’Rivera. In November 2009, Sujari had the honor of performing with Alisa Weilerstein at the White House for President Obama, the First Lady, and their distinguished guests, where she was brought to the attention of many notables in the classical music industry.

Sujari was featured in Strings Magazine Fall 2015, and was StayThirsty Winter 2014 Spotlight Artist to watch! Sujari also was featured in an on-line THKR/RadicalMedia PRODIGIES, a TIME for Kids/Time Magazine article, Ebony.com and a segment of Katie! with Katie Couric. Sujari joined a host of prodigious young movers of the world on TEDx-Redmond of TED Talks, and was featured as one of NBC TheGrio’s “100 History Makers in the Making.”

Sujari serves in the Arts Leadership Program of From the Top. She is the distinguished recipient of prestigious academic scholarships and awards, and grand prize winner of numerous national and international competitions. Sujari plays a Neuner and Hornsteiner cello made in Mittenwald, Germany circa 1718, generously loaned to her by Carlsen Cello Foundation.

In addition to her active solo career, Sujari is a member of JoSunJari, a classical string trio with her sister Joelle (violin), and her brother Sunnaj (violin); and a member of various troupes and ensembles of classical, jazz, and eccelctic genres. 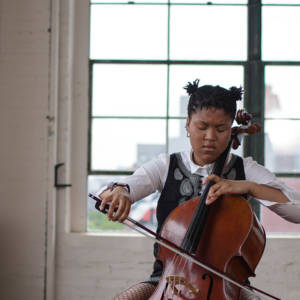 This is the program you’ve all been waiting for—by the time it arrives, literally for two years! We were on the verge of performing this concert when the Covid lockdown began in March 2020. We are looking forward to having Sujari Britt back with us at last, for her long-awaited performance!

Price Dances in the Canebrakes
Saint-Saëns Cello Concerto no.1
Still Symphony no.1, “Afro-American”